Carolyn Wahl is one of Kinhaven’s longest serving and most beloved staff, having joined the faculty in 1983. Carolyn, who has been a member of the Florida Orchestra since 1974, received her bachelor’s degree from the Baldwin-Wallace College Conservatory and has performed with the Chicago Civic Orchestra and the Buffalo Philharmonic. Her teaching experience includes St. Petersburg College, the Pinellas County Center for the Arts at Gibbs High School, the Pinellas Youth Symphony, and private instruction and coaching at high schools. We have long wanted to profile Carolyn in our newsletter. Here is what she had to say.

EXPAND for our Q&A with Horn Teacher Carolyn Wahl

Q: Your students say you inspire them, that you “know how to light that fire.” What inspired you to become a horn player?

Carolyn Wahl: My dad was a music teacher in elementary, middle, and high school. So I grew up with it. I began on piano at age 6. My dad would say, “What instrument do you want to try this summer?” So between sixth and seventh grades I decided to try the French horn, and that stuck. I suppose sometimes the instruments pick us. I realized that when I was still playing piano and went to a concert. Afterward, someone asked me if the pianist had inspired me. I said, “Sure,” but the truth was I was more inspired by the horn section in the back.

Q: Did you like practicing? How much did you practice?

Carolyn: Practicing! Well, I was always getting ready for things, so out of necessity I was practicing, and it wasn’t boring. But I wasn’t like some of my students who practiced too much, some of them six or seven hours a day! The thing about practicing is that it’s solitary. You have to be comfortable being alone in a room. But if you don’t like it, better find something else you’re passionate about.

Q: If you’d known about Kinhaven as a young person, would you have attended? Why?

Carolyn: I would have loved Kinhaven. The constant changing of chamber groups, playing in a woodwind quintet one week, then with the brass the next, would have appealed to me. I would have enjoyed playing in the orchestra, learning the music quickly, and a different repertoire each week. I would also have spent time in the art house learning pottery. And I would have loved the traditions, the regatta, Wally Wampus, etc. You don’t see that in other music camps.

Q: This will be your thirty-fourth year at Kinhaven. How do you get ready for another summer?

Carolyn: I think about what my class will look like. I’m curious to see who will come back. It’s easy to ignite kids there, especially after their first summer. One year I had this student – I knew he had something special but he just wasn’t interested. I had to get him to Kinhaven! So I introduced him to someone I thought he would think was cool – and he recruited him for me. Now he’s plays with a major orchestra. He just caught on fire at Kinhaven. It’s fun to figure kids out, to get into their heads. But sometimes you have to outsmart them a little bit! 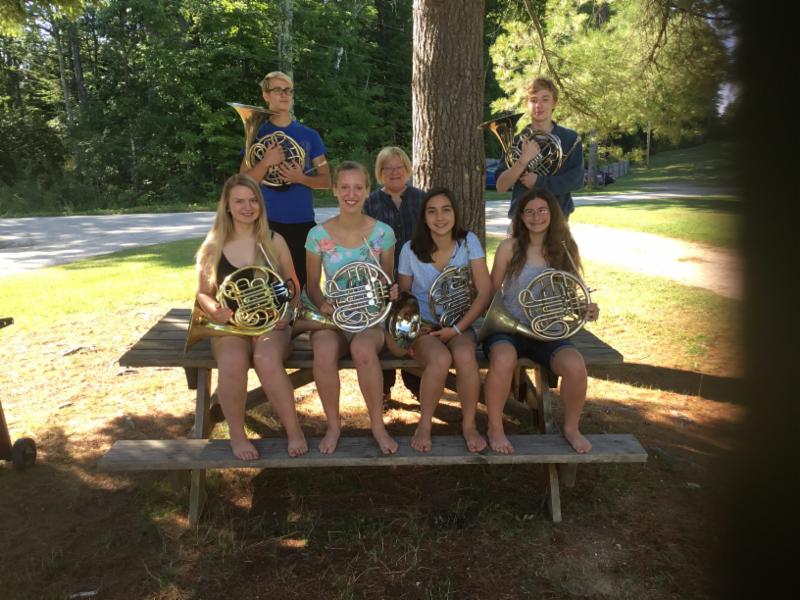 Q: Do your students ever surprise you with an insight or inspire you?

Carolyn: Quite often, my conversations with students make me aware of what other teachers are telling them. I’ll try anything to get a point across. So the students will tell me something, and I’ll process it and determine whether I can use it. I also like to watch others work with my students – it gives me ideas to try. Of course I always use myself as a guinea pig! I like talking to them and hearing what they have to say – it helps me understand how they think and what’s important to them.

Q: What is it about Kinhaven that keeps you coming back for more than thirty years?

Carolyn: What I like are the people and the enormous respect they have for one another. Since the students are rotated in groups, competition is downplayed, which was the intent of Kinhaven’s founders. Everyone gets along and cares about one another. I like an environment where teachers are interacting in a personal way and giving all they’ve got. Since there are under 100 students, it is an intimate experience for students and staff. It is possible to really spend time helping your students and other students in the groups we coach. I’ve been going back so long that some my friendships with other faculty are very deep. And it’s a beautiful place. It’s a little like Brigadoon, a magical place that appears briefly just once a year.

Q: What’s your favorite composition that features the French horn?

Carolyn: I should probably say whatever I’m playing at the moment! But I love orchestral playing. Every week it’s another masterpiece. The orchestra has all the components of smaller groups, it’s all present. Sometimes, while waiting to play my part, I lose myself, surrounded by the beauty of the sound.

Carolyn: I especially enjoyed watching him with the students. I especially remember the camp meetings, where Jerry would moderate discussions of issues of concern to them. All students with something to say were listened to. It was fun to watch him guide them to come to a compromise and see each other’s points of view. Sometimes the outcome was different than even Jerry thought it would be, but he was great at finding common ground. He was also a clever poker player. We all loved playing with him on Monday and Thursday nights! I will miss Jerry at Kinhaven but his spirit will remain with us all.