A Supportive Community of Loving Souls 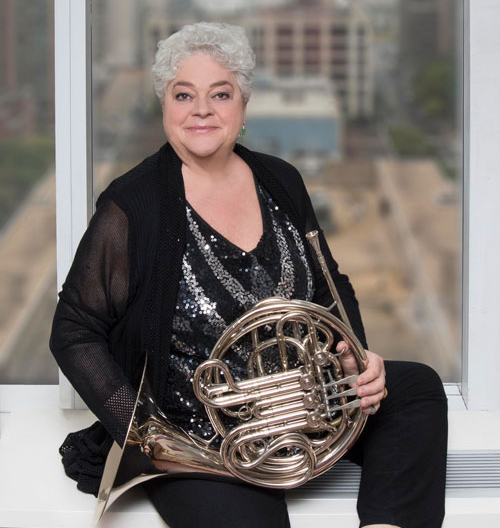 Brooklyn-native and world-renowned French hornist Julie Landsman was the principal horn of the Metropolitan Opera Orchestra for twenty-five years (1985-2010). She has also served on the faculty of her alma mater, the Juilliard School, since 1989, in addition to holding master classes at top conservatories such as Curtis, Eastman, and the Colburn School. In addition to countless recordings, Julie has performed with the New York Philharmonic, the Houston Symphony, the St. Paul Chamber Orchestra, the Los Angeles Chamber Orchestra, the Philadelphia Orchestra, and many others. She was the recipient the Pioneer Award from the International Women’s Brass Conference and was a featured artist at the International Horn Society Conference in 2012 and 2015.

As a Kinhaven student in 1968, Julie much appreciated the support and inspiration the faculty offered. She fondly remembers them as “very kind and very generous people” and was in awe of their musicianship and teaching. Particularly impactful was clarinet teacher Joe Contino who was not only “very kind and very supportive, but also went the extra mile to show his care and concern by often sitting and talking with me, offering guidance at a critical time in my life.”

Julie was deeply moved by singing in the choir: “It just knocked my socks off. It was such a communal and loving experience.” Speaking of having her socks knocked off, she was enthralled by the fact that no one wore shoes (“I loved that”), as well as swimming in the pond, catching frogs, and wearing the “traditional garb:” the serape. There was also the Gavin tree, named after a violinist, which was very popular to climb. Kinhaven, as Julie quickly learned, was ensconced in camaraderie and community: a unique and rare safe-haven where everyone could be free and be themselves.

Julie accredits her time at Kinhaven as “pivotal, musically, for the first time in my life.” She most fondly remembers her horn teacher, Jane Aspnes, whom she adored, and conductor (later Executive Director) Jerry Bidlack, under whom she performed the Brahms Academic Festival Overture. She remembers how difficult it was to learn the tricky rhythms and how she aimed to be as prepared as possible.

Julie believes that “Kinhaven helped foster my love of music and playing the horn, and was an important step in beginning my very longstanding and successful career.” Julie is very close to Carolyn Wahl, Kinhaven’s current horn teacher. “The horn department at Kinhaven is absolutely stellar.” While Julie has not been able to return to Kinhaven because of scheduling conflicts, she wishes Kinhaven well. “The intentions are really clear, and they are incredibly supportive of all who attend, students and faculty alike.” Julie will always keep Kinhaven in her heart. It is, she says, “a supportive community of loving souls.”