Kinhaven Executive Assistant Matt Frohnhoefer is the behind-the-scenes magician who has made Kinhaven’s operations run so beautifully for the past seven years. From organizing Board meetings to managing admissions, auditions, the bookkeeping, fundraising, and logistics, Matt’s calm and reassuring support is relied upon by the executive team, staff, parents, and students alike. We put Matt in the awkward position of talking about himself so that all could get to know him better. 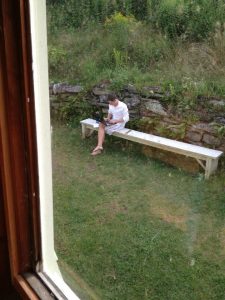 Q: Why do parents and students so closely link your name to Kinhaven?

By the time families arrive at the first day of the senior session, they’ve been corresponding with Kinhaven for six months, from submitting their applications, the audition process, and following up on paperwork, tuition, and financial aid. I’m the point of contact for all of that. Ninety-five people moving in all in one afternoon is hectic, but they get up to the Main House common room and they’ll say, “Hello, I’m so and so’s parent,” and Debbie says, “Hi, I’m Deborah Buck, one of the co-executive directors. Welcome to Kinhaven. This is Matt.” And they go, “Matt, you’re Matt!” I think they’re just so relieved to have someone familiar. I’m the name they latch onto, because they’ve seen it on 20 emails since January.

Q: What has motivated you to stay with Kinhaven for seven years?

It’s easy to believe in the school’s vision. I came to Kinhaven from a very job-like job where it was a struggle to tell myself I was doing anything good for the world. Working at Kinhaven has opened me up to the wider world of educational admissions, nonprofit accounting, and arts management. Kinhaven occupies a uniquely important space in the world of summer music instruction. There are plenty of high-level, intense-focus programs. And there are plenty of summer-camp, fun-oriented programs. But Kinhaven has found a way to hit both effectively without sacrificing either, and in this it has created its own identity: it’s not just half this and half that.

When people talk about the environment of Kinhaven, the atmosphere and the noncompetitive nature, they’re touching upon an experience that is all at once intensely musical 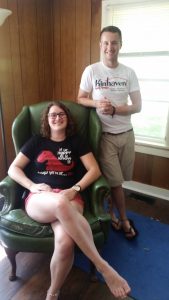 and intensely humanistic. It’s about letting students have a chance to enjoy being a kid before they go off to whatever they’re going to do as grownups. Kinhaven lets them experience music intensely but encourages them to take advantage of six weeks on a 31-acre campus in the middle of a national forest in Vermont.

The other thing Kinhaven has is the people that work there all believe in what Kinhaven stands for. From the directors through the board, through the staff, through the cooks, everybody gets it and they’re all there for the same reason. Things aren’t sunshine and rainbows all the time, but at any point a conversation can be brought back to center by somebody saying, “We’re doing this for the good of Kinhaven.” Everybody genuinely seems to want to give a little more of themselves in service of Kinhaven, and I like being in that environment. 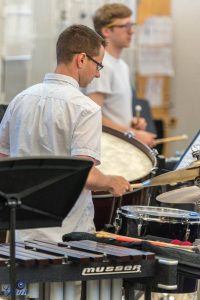 Q: Any music in your background?

As a trained-amateur percussionist, I play with a fantastic wind group out of Princeton, the Eastern Wind Symphony(Matt is on wood blocks). I also carry a small studio and have been coaching percussion in Hillsborough, New Jersey, for almost 15 years. But I laugh about it, because I had no business (or interest in) becoming a musician. This all started because I was trying to impress a girl. As a child I had no interest in music – popular, orchestral, or otherwise. But in fourth grade, I vividly remember being infatuated with a student in my class. The rumors were she was interested in another boy, a hulking, blue-eyed, handsome young man, but I didn’t recognize any of those features as to why she might have been attracted to him. All I could recognize was that he played the drums. Ergo, if I learned the drums, maybe she’d be interested in me. So I signed up and I did the school band thing, learning on a drum pad in the janitor’s closet at our underfunded elementary school. Never got her attention, by the way.

Q: What’s it like working with Kinhaven Co–Directors Tony Mazzocchi and Deborah Buck?

Tony is crafted to be an executive director. Just about everybody likes Tony at the first impression, and he commands their respect. He doesn’t shy away from the big picture, thinking 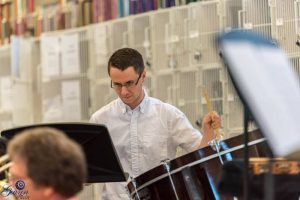 about the company from the top, but for my position, which is all about the details, he knows enough and delves into them enough that he’s very good to work with. I have a long leash, which I appreciate, but he checks in. I’d never want his job: I am built to be the number three, to be the numbers guy in the background. Debbie has a way of talking to anyone and they feel heard and understood. A conversation with Debbie is really an experience in connecting to another human being. As an executive director for a company, that’s huge that she can interact with every parent, donor, and faculty member. If they have a question or a concern, even if they just want to say something nice about Kinhaven, if the person they talk to is Deb, they’re going to walk away feeling better. Between Tony and Deb, they’ve got all of what you would want in an executive director. We survey faculty and staff anonymously, and one of the questions is, “How effectively do the directors respond to your concerns?” Another is, “How effectively do they respond to student concerns?” In seven years here, I have never seen a person make a critical remark. They say, “Tony and Deb are amazing. Tony and Deb handle things perfectly. Tony and Deb handle everything with grace.” 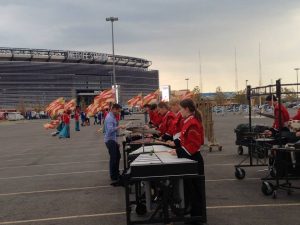 Q: How do you envision Kinhaven’s future?

I want Kinhaven to grow. It has to be handled carefully so it doesn’t turn into something different, but I want to see it do what it does for more people. If Kinhaven is able to reach twice as many people, three times as many people, of course the organization is going to have to grow along with it. If that could happen, I would be thrilled to be a part of what Kinhaven becomes.

← Everybody Gives Day 2018
Junior Session Packs in the Activities →